Hey folks as some of you know I have had a Corsair H50 sitting here waiting to be tested since last January.

Why the long wait, well I have been using my Domino ALC from CoolIT Systems which has worked flawlessly for me with my i7 920 overclocked @ 4.0 GHz. I tried to do some testing with the Domino by adding a shroud but it did nothing to the cooling ability of the unit. I wanted to test the Domino in a Push / Pull configuration but the Domino cannot fit a second fan on the other side of the rad due to the control panel attached to the unit.

But the H50 will allow you to add fans to both sides of the rad so I thought it was time to test this unit out for myself.

I am running an i7 920 overclocked @ 4.0 GHz 24/7. The Domino ALC and the Corsair H50 had almost identical temps during my testing. Both units were configured as intake units using the stock fans that came with the units. The fans were attached to the back of the radiators and attached to the back of the computer case thus drawing cool ambient air into the rad from outside of the case.

If you plan a setup like this please be sure to have an additional fan somewhere in the case to exhaust warm air from the case. I use a CoolerMaster Storm Sniper case which has awesome airflow so intake and exhaust is not an issue with my case.

The first screenshot is of the computer temps idling @ 4.0 GHz when using the H50 as an intake the way Corsair suggests it to be setup. 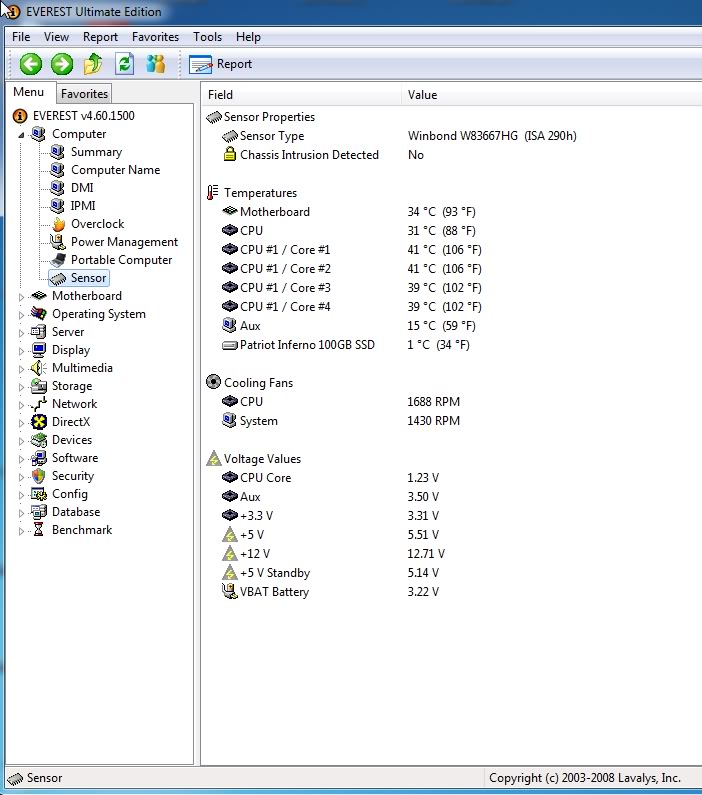 The next screenshot is of the computer temps when the system is being stressed to 100% with Intel burn test. 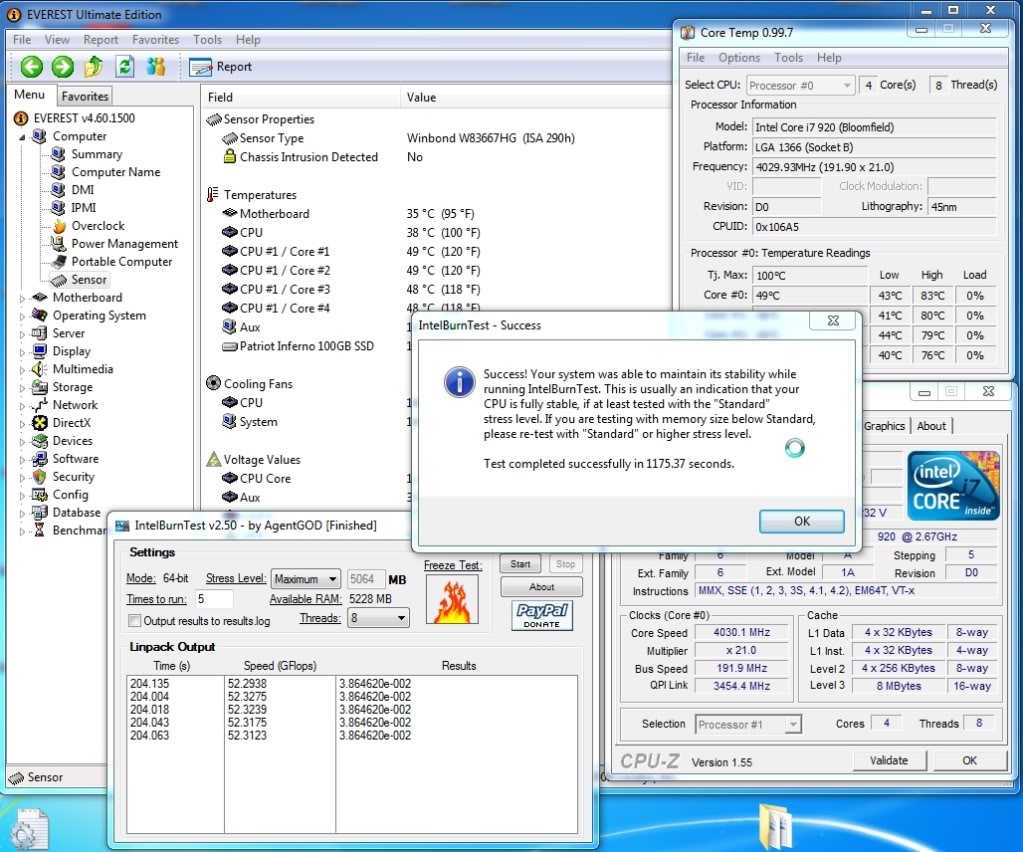 During this test the CPU reached 72 - 73 degrees and kept switching back and forth. The first and second core temps were well into the 80's. Personally I think that is great cooling for a 4.0 GHz overclock especially when the H50 can be purchased for anywhere between $50.00 to $70.00 CDN.

Now to test the H50 with dual fans in a Push / pull intake setup.

The fan that comes with the H50 is a 1500 RPM 50 CFM 120X120X25mm fan. When setting up a push / pull configuration it is suggested to use 2 fans of the same specifications for best results.
The closest I could find for matching fans were 2 SCYTHE S-FLEX 1600 RPM 63.7 CFM fans. The screenshots show that the System fans being monitored by Everest show the fans not exceeding 1442 rpm therefore the CFM would be very close to that of the stock fan for the H50.

The first screenshot here is of the computer idling @ 4.0 GHz. 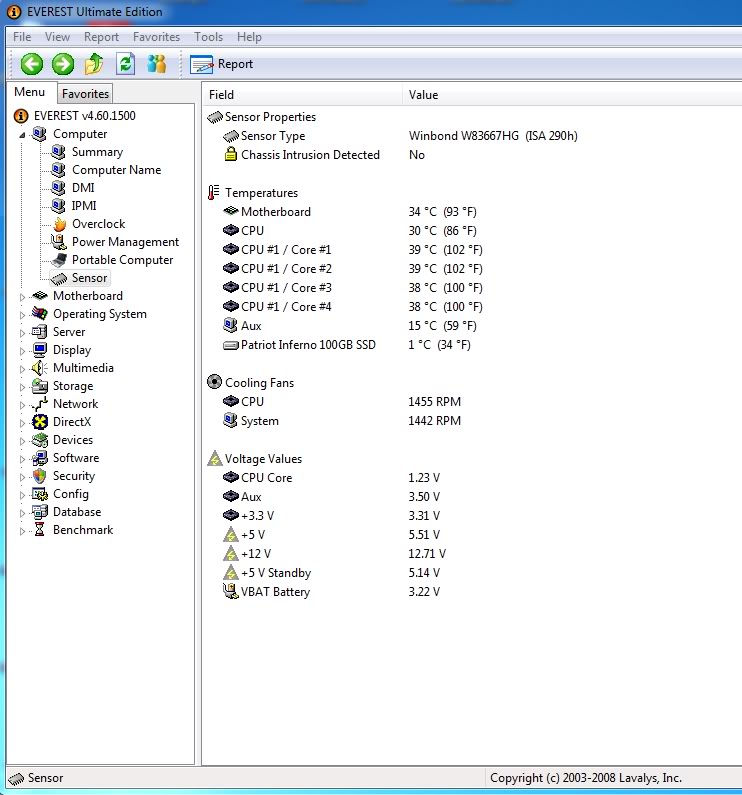 As you can see the temps are about 1 degree cooler at idle using a push / pull intake setup. Are ya ready to see what happens when we test the system at 100% load? Have a look at the next screenshot. 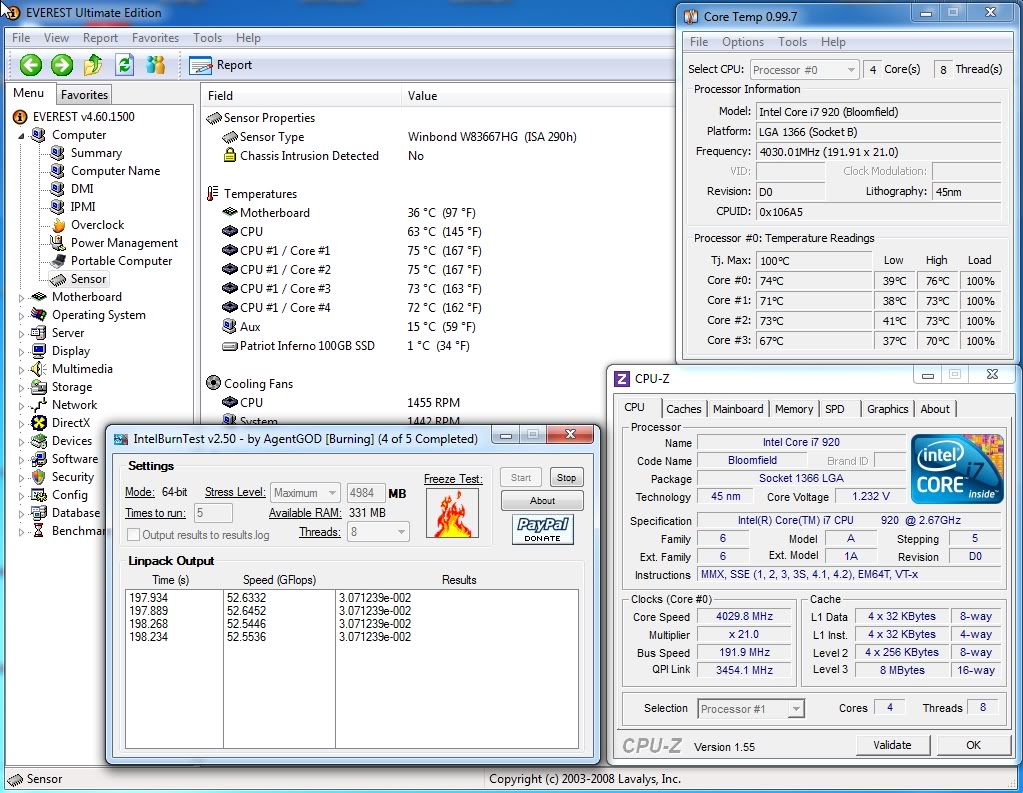 The CPU temp reported by Everest never rose above 64 degrees. That is a 9 degree cooler reading when using a push / pull configuration on the H50 unit! That in my opinion was an awesome gain in cooling performance for the price of 2 120mm fans.

Corsair has just recently released there update to the H50, the H70 which has a thicker 120X120mm radiator dual fans and a shorter pump waterblock which should allow for the addition of shrouds to the fans if you wanted to try that setup.

I have used push / pull setups on tradional air cooling units in the past and never had results like these.

I would highly recommend to anyone who owns an H50 to mod it to a push / pull configuration for the extra cooling ability at high overclocks and at high system loads.

Looking good Joel, thanks for sharing, so you like the H50 setup or are you gonna go full water.

Nice temps quite an improvement over stock thanks!

I would like to go full blown water but at the moment with these temps I will wait till probably Christmas time and then build myself a gift. LOL

Vinny, I was really surprised at the difference the extra fan made. I figured maybe 3-4 degrees.

I picked up a few new bits today for my H2O loop, I got the distilled water, tubing 1/2" ID 3/4" OD, a T-line ball valve to drain the system the only thing I need now is a additive to stop fungus growth, probably PT Nuke but I would hate to have to spen 3.50 bucks on it just to pay 30.00 for shipping LOL so I'm trying to find it locally with no luck so far.

What about NCIX are they not closer to you and do they not sell cooling components and supplies?

That may be a great alternative for smduff.

protects against corrosion, electrolysis, and protects and lubes water pump and seals

No NCIX has only the premixed crap, I'm going with a theam here so the stuff Vinny is using is a no go for me I need something blue.

My shit glows in the dark under UV light lol!

Great if your theme was The Green Lantern lol!

Excellent results for sure Joel. :yourock:

smduff wrote:I picked up a few new bits today for my H2O loop, I got the distilled water, tubing 1/2" ID 3/4" OD, a T-line ball valve to drain the system the only thing I need now is a additive to stop fungus growth, probably PT Nuke but I would hate to have to spen 3.50 bucks on it just to pay 30.00 for shipping LOL so I'm trying to find it locally with no luck so far.

Maybe a trip to the big city?

The big city is a 4hr drive lol

Great job Joel. What a difference between the 2 configuations. When I did my H50 I went right to the push/pull and never tested with the 1 fan. Thanks for sharing the info.

A nice interesting read Joel. Glad you like the H50 my friend.

I must say I am AMAZED at your temps with two fans. I can only achieve the same as your single fans results , to which are reasonable anyway. I have two Noctuas on it as well. ? Though i have 3 others to replace the rest of my internal fans i just have not had time to do.

I did see the H70 review , its awesome for an all in one kit. Though still has some light flaws.

For now i am hardly on the puter , but will look at whats available when them time comes to get back in the game.

Glad you enjoyed it Craig and good to see ya!